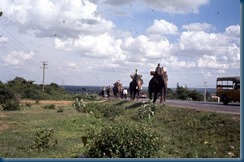 Mom gave me a book of my poetry one year for Christmas. My actual poems published in a book. It was the most amazing gift (I still have the book). I never published much poetry over the years but there have been that made it into magazines. Mom was the first person to publish more than one of my poems. That book is a treasure for me. I even hand wrote in a couple of other poems (they book had a few blank pages as well). My handwriting isn’t great so they are hard to read. But more importantly was the gift itself. The thought and the consideration to take poems I had written and make them into a book for me. It is one of those gifts you never forget. 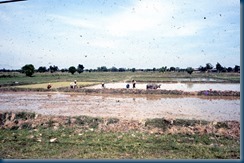 This particular carousel had a lot of loose slides so I believe we have moved back to Thailand with these pictures.

Mom loves dogs. It started with Macgregor who was clearly dad’s dog but we all loved him. He was a great collie. We had Phoebe and Frosty next a Great Pyrenees and a Newfoundland. But the dog that was probably most mom’s was Loch Nyssa She was a Cairn Terrier, and she and mom were connected at a very special level. Nessie as she was called became the second boss of the house. She would defer to mom but the rest of us worked for Nessie. Nessie was mom’s dog and the two of them were very close. I think the most interesting thing about the two of them was that when mom would talk to her, Nessie would cock her head to one side as if listening. As if about to comment on what mom was saying. 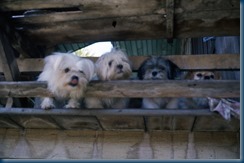 No clue where this picture is from.

Nessie passed away a few years ago and while mom still has dogs around I think she misses her pal. Phoebe was her co-mom, but they were often at odds due to a constant disagreement about the amount of food Phoebe needed to be consuming (as in Phoebe wanted all the food in the house for the most part). We had cats as well. Mao was our Siamese cat that lived with us in the city and moved to the farm. But Mao didn’t like people much. She liked killing birds and mice but people were not high on her list. Mao had been declawed while we lived in the city. She was declawed because she and mom disagreed about the purpose of curtains. Mao believed curtains were something you should use to practice climbing. She would literally shred the curtains in the living room. So to end that argument we had her declawed. She still managed to kill birds and mice. She just didn’t play with them as much. The look on mom’s face when she came home and decided to open the living room curtains and found that instead she had living room tatters was one I will never forget.