It was early in 1998, and we were scrambling. We were preparing for a new addition to our family. Secondly, because we had found out the 2nd addition was, in fact, a 3rd as well. Twins, not something we had talked about, planned for or even considered. It was also a very difficult pregnancy. But beyond the pregnancy itself, it was twins. We went from needing one of everything to needing two or more of everything. 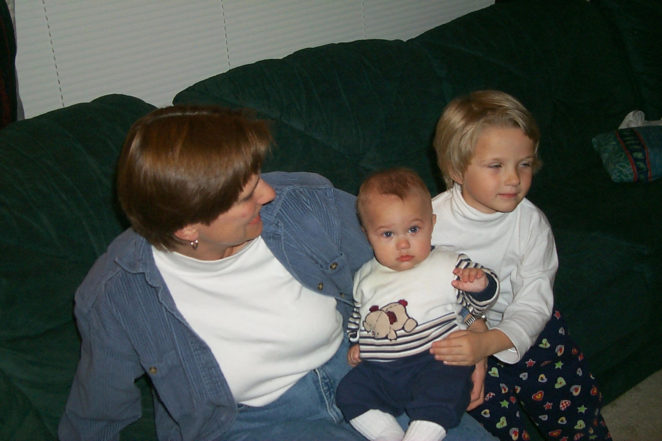 It was a devastating and horrifying time. I cannot share the agony we were going through. Being a parent is a hard job. When your child is sick, and there was NOTHING you could do, the nerves just devastate.

We had one interesting thing to discuss and consider as we faced this peril. That was moving to a new house. My wife was preparing to start looking as soon as the boys were home. Then because of the second illness, we waited. Waiting was probably the answer to the question. In the end, we were able to build a house in a new subdivision because we waited. It was the perfect house to transition and was to be our last house in Ohio.

My wife is a very talented person. As a professional, she spent five years working as a video producer for an advertising agency. That ended for her, one afternoon in the summer at my parent’s house. Our daughter fell and skinned her knee. She was in the backyard, my wife, sisters, and mother were all standing on the deck, and I was inside talking to my dad in his home office. My daughter started crying ran past my wife and into the house to find me. Back then I was home more than my wife was, I was the parent that fixed boo-boos. That was when my wife decided we needed to come home and no longer be a video producer.

One of the things she started when she first came home (and still does even though she has a lot less time) is mosaics. The pictures Today are of the first few she did. Today she is working on coffee cups and a crab mosaic. But the first couple of projects were the mosaics in the pictures. We have lots of vacation pictures over the years from my wife stopping to take pictures of mosaic where ever we were!

I am going to use my mosaic coffee cub to hold pencils. It has a rough edge so drinking from it might not be optimal. I am also a little worried that I would damage the cup if I drank from it. When it is done, it will go on my desk and be a wonderful pencil and pen holder. I am down to roughly two pens in my entire office, and I can never find them. I have other things that I keep in the pencil holder, however!

Many years ago, 1999 or so, we bought a boat in Cincinnati Ohio. This is us, standing in front of that boat. It is funny we have 13 total pictures ever of that first boat. We have nearly 500 pictures of our second boat in Indiana, and our 3rd and 4th boats are well more than a 1000 pictures each. The first boat was all film pictures as well. They were scanned as part of the family history project. Our first boat and our current boat were both Sea Rays.

That first boat was on the Ohio River. We learned a lot about boating then, although the kids were a lot younger. One of the things we learned, is that the Ohio River is dirty. My father always used to say “Too thick to navigate, to thin to cultivate.” It truly applied to Ohio back then. It wasn’t pollution; just the standard runoff from farms and the ground in the river. I suspect there was probably a level of pollution as well. 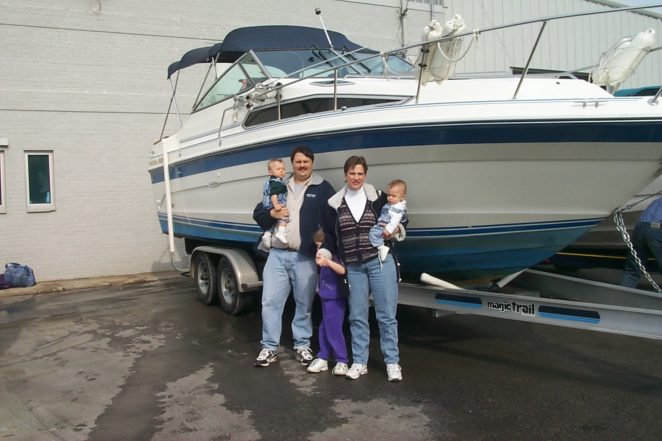 We kept the boat at a place called Captains Cove. They had a wonderful restaurant right on the water; we ate there a few times. We spent time exploring the riverfront area of Cincinnati that first, and the only year we had the boat. We did try to stay away from the downtown Newport KY, and Cincinnati Areas as most of the people with boats were in that area. Plus with the bridges and barges, it made for tricky navigation.

It reminded me of how much I loved boats!

I am finishing up the Disney vacation pictures at Universal Studios our last day in Orlando. Yesterday we talked about the impact of Barney. As in our son, who was terrified of the Disney characters other than Captain Hook was dancing to see Barney and friends. The TV show that I think reinforced the reality of placating and thank you in our house. Adults can say a lot of things. Parents, often say even more cautionary things than adults, but when Barney says it, you best get on it!

We only spent one day in the Universal Studio’s park. We could have spent more, but by that point, we were well into exhaustion. Funny how a vacation can make you more tired than working. Sure there were a lot of moments of relaxation on that vacation. Going out for a night kid free on the cruise ship was fantastic. Hanging out on the beach for a day was relaxing. Riding in a horse and buggy through the Grand Bahama was a blast. But vacations are also long when you are lugging a twins stroller everywhere. 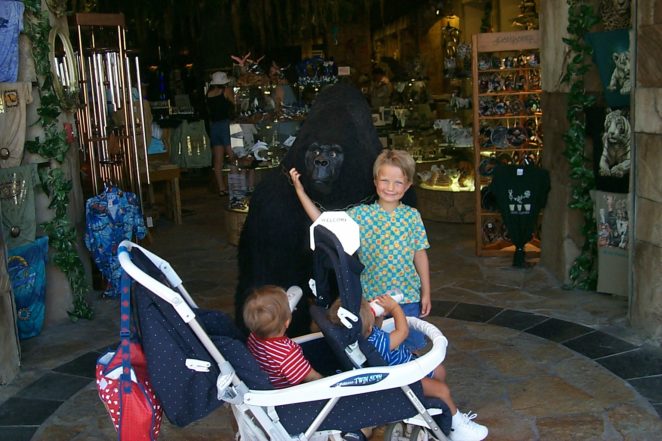 I would never do five days in the Disney Parks, the cruise and then come back to do Universal Studios again. It was too much crammed into too little time!

First off in the sense of telling the truth, I love water, but I am not a huge beach person. Well, I am not a huge crowded beach person. I love the beach, but my favorite time on the beach is when the beach is less crowded. That comes from the first beach I was ever really on. The one, my grandfather, built in front of his house in Wisconsin. He carted in the sand, so we had a beach on the shore of Lake Ripley. There are many videos and pictures of my sister and I playing on that beach.

I like a beach that isn’t crowded. Because we brought a cruise ship full of people with us, that was not the case for Castaway Cay. The beach was crowded. It was fun to hang out for a bit and wander into the water’s edge, but not the best beach experience for me. There was also watercraft you could rent, we didn’t and the ability to wander the island. The sand was white and blazing hot. Taking your shoes off was not advised unless you were close to the water. 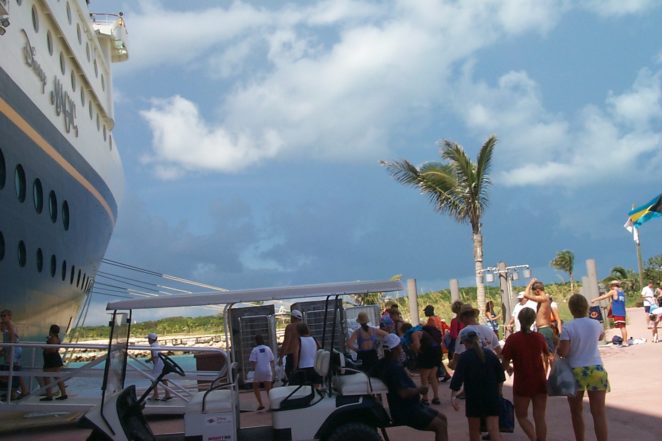 The views, island and the entire experience were awesome. Fewer people would have been better, but the beach was wonderful. I have to say I did spend some time thinking about the reality of the people on the Island. Back then Disney had one cruise ship (The Magic) they now have two. Did the workers come out to the Cay the day before the ship arrived? There were a few places they could stay, but no real permanent buildings. I spent some time noodling that.

One of the things that I was interested in but not clear what it meant was the itinerary item for the Disney Magic, Castaway Cay. I had while living in Thailand and later on vacation on Beaver Island in Lake Michigan had been to an island. I wasn’t sure what value there would be on the island. I knew our daughter wasn’t going to hang out with us much. The kids club was doing a dinosaur dig.

Interesting that they choose a dinosaur dig. 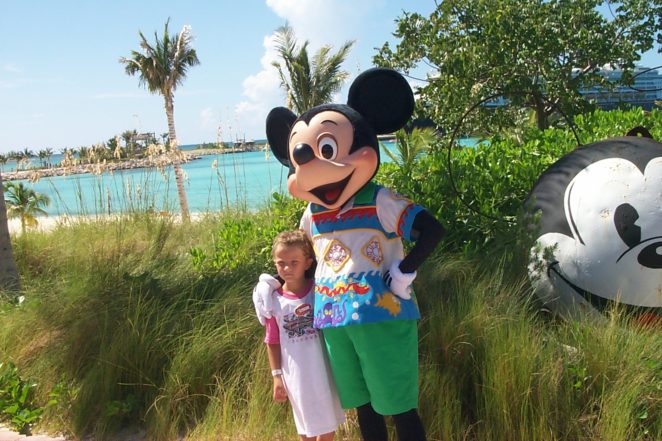 All of the pictures shared today come from the arrival, and eventually wandering around the Castaway Cay. It is Disney’s private island and we enjoyed the day spent there. That also brought the first character that my son didn’t scream, cry or pull away from. I suppose we should have to know that Captain Hook would be the one Disney Character he would like.  But that would come later initially we were preparing to leave the ship.

We had a wonderful stateroom (plenty of room for five people), and the balcony was fun to wander out to. The picture shared today is of one of the boys, making a face sitting on the balcony of the boat as we were docked, getting ready to go ashore. Hard to tell if his fear of characters had worn off, he had been around them for six days at that point, or just that he loves Captain Hook. I guess we will never really know the answer as both happened, and he was far too young to tell us!

One of the things I started doing at the beginning of the 365-day photo challenge was sharing the last 10 or so pictures I had taken. Most of the pictures I’ve taken recently I have used in the challenge, but there are a couple I didn’t use. Variations on the theme I suppose! The pictures shared today to go from unboxing a 3d printer, to the snow that fell yesterday through last night. The good thing (but not good for those north of us) is that most of the snow didn’t fall here.

I started my family history project when my father passed away. In part because I knew he was leaving me his slides. I didn’t however, at that time know that my father was leaving me 20,000 slides. Pictures that frankly I hadn’t ever seen. Plus, there were another 4000 pictures stored on memory cards and another 15000 pictures. By pictures, I mean the old fashion printed on Kodak paper pictures. My kids scanned all of those.

The family history project (scanning) took nearly two full years. In the early days of that process, I started sharing the pictures as part of my blog. At the same time, of course, we were still adding pictures and continuing to expand our digital library. I also converted all of the films my grandfather left me into digital. Plus all the videos we had taken of the grandkids and my siblings we converted to digital as well. We have a lot of family memories to share!