There was a wonderful gymnastics place near our house in Greenwood, so we took the twins there for a couple of years (and my daughter as well although she was less interested in bouncing around than the boys were).  The reason for bringing this up today more remembers the twins when they were little. There was a time when having the twins was two, three and sometimes what felt like infinitely more work than having one child. In part because they were younger and we were older.  In part because the twins were mobile, agile and hostile most of the time.  I won’t go into the last couple of issues, but health for the twins was also a huge concern when they were younger.

Getting they’re, as my wife called them, ya-ya’s out was a critical goal many days. Dumping them in the pool, running around town, or running to the gymnastics place in the winter was often the salvation. Funny how you remember those little things from long ago.  My wife took all of these pictures; I think I went to the Gymnastics place twice ever. Once dropping off (walking in, meeting the teacher) and one time watching the festivities. For the most of the work week, I was out of town. Either in Chicago or some other city that wasn’t Greenwood. I did for a time have a customer in Batesville and a customer in Columbus Indiana. But I was still gone all day, just driving instead of flying away. 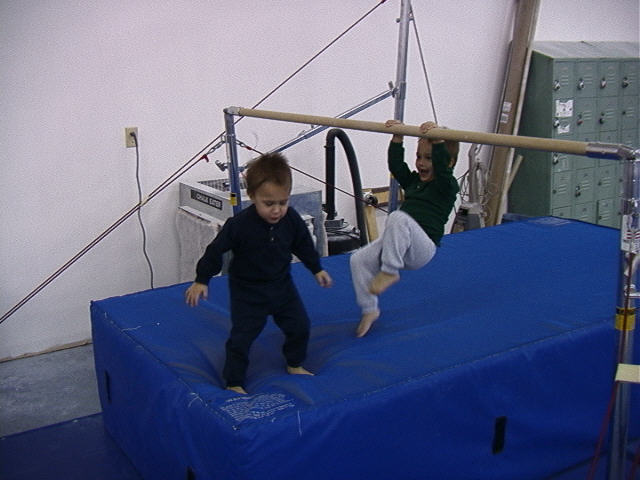 The pictures of Gymnastics were taken by me. One of the few times I visited. There are a couple of camera rolls my wife took (she was still using a film camera when the twins were little). But these were digital images I took. I know I took them because there are a couple of images of my wife, moving a twin from one location to another. They, the twins, could be a little stubborn then. Now, not so much on the little stubborn thing. Now it is full of stubborn, but then you could still always pick them up and move them. Now, you can’t pick them up without a huge amount of effort. Time passes at some different rates. Sometimes it is a sailboat floating along on the water. Sometimes it is a paddle boat, moving at the speed of the user. Sometimes it is a jet plane blasting off a carrier deck at high speed and pulling away.