We have embraced a new tradition this year, having lunch and then heading out to the Bay. In particular, this time we were wandering towards the Bay Bridge. From the time we left our slip at our fantastic marina, to the time we cruised along the edge of the bridge watching traffic move, we encountered some sailboats. They tend to come out when the wind is moving, and the wind was moving on the Bay yesterday. I shared a picture of Lars as my photo of the day for the Challenge today. We also managed, carefully to roll by the Osprey nest and see mama sitting on the eggs. You have to be careful that you don’t get too close to mama, or she will take off.

Osprey is really beautiful birds. My picture isn’t as good as the ones shared by Carol, or Pam, but I try! The Osprey picture is the last one in this series.

From the marina to the area where we go full out, is normally about a ½ mile. It was longer on Sunday as there were many more, as mentioned before, sailboats out. The rule of boating is if you re under power, either powerboat or sailboat you have to always give way to those under sail. You have less control overall under sail (the wind being a factor in that process) than you do under power by a factor of 2. Yes, there are those who sail with expert skills, but you are still limited by the wind. So we slowed down and puttered by the sailboats. Not all the power boaters follow the same rule; we were rocking pretty bad from the wakes of a couple of power boats that rolled by, at pretty near full speed. 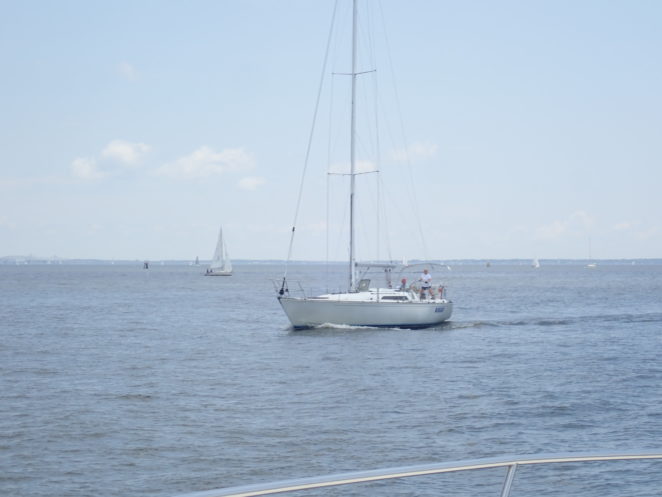 We didn’t see any dolphins, but I haven’t heard reports of them being up into the upper Bay yet. I suspect the water is a little cold for Dolphins still. In fairness, I do not know if dolphins care about water that is 55 degrees or they need warmer water. I was just guessing based on my experience with humans and cold water. As in the cold water that was never cold when my kids had me jump into the pool.  Just a feeling I have. We took pictures of the boat and heading out, and the Osprey. Another day of fun on the Bay!