All three of the kids love rock climbing and rock climbing walls. Once upon a time in Indiana, we had a sporting goods company called Galyon’s. They had a megastore in Greenwood, and part of that store was the rock wall. Much like the RCI (outdoor chain), the indoor rock wall was a place the kids could go and learn/practice rock wall climbing. All three of them love the activity. Galyons later sold their stores to Dicks, Disks kept the wall for roughly a year after that and had walls in many of their stores, but the reality of liability made them discontinue rock wall climbing. Sure, the kids blamed Dick’s for discontinuing the wall climbing activity, but it wasn’t their fault. I am sure their insurance company said “sure you can have a rock wall in every store, just pay us.”

If I may, for a moment, wax nostalgic, I loved Galyons. I first went there when I was eight or nine years old with my father. Dad loved being outdoors. We bought a canoe at Galyons many years ago. But the first trip was to visit the store. It was on the north side of Indianapolis then, so a good solid 1.5-hour drive from Bloomington IN. We hopped in the old blue mercury station wagon and headed off on an adventure. Dad didn’t run the air conditioner often, so we had the windows down. Dad also didn’t like listening to music while he drove, so we either talked or watched the scenery go by. Interesting now, sitting alone often in my car in traffic, I need the music! But then I didn’t know any better, so silence was fine. 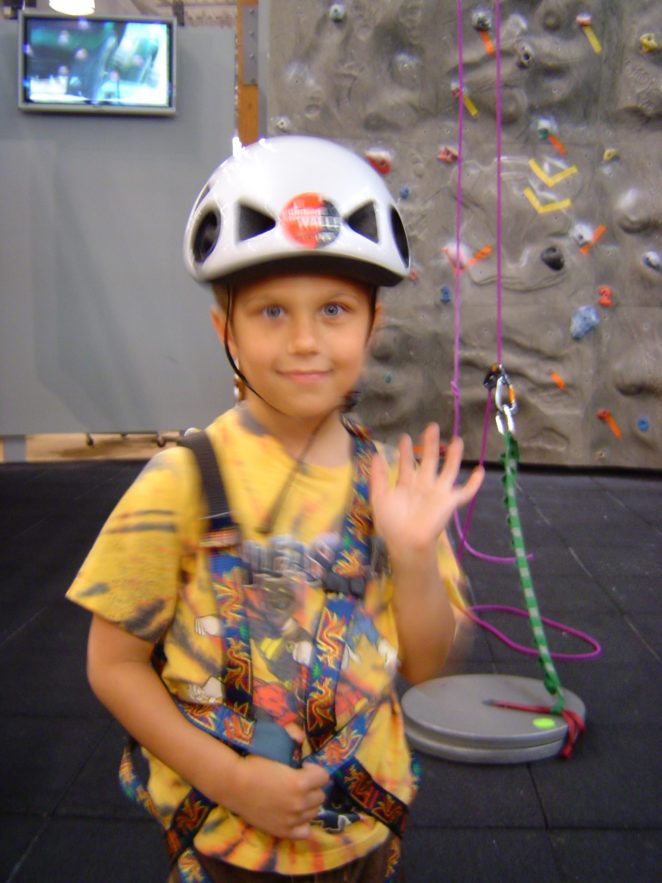 Back to the pictures, some of them are blurry and not positioned correctly; I am continuing the rule of sharing all pictures from an event, no matter how bad. A couple of the better pictures are sadly blurry, it was one of my first digital cameras, and I had a lot to learn (I still have a lot to learn). Later on, I realized that video was better for rock climbing, but for this event, I had the still digital camera. Video allows for the motion of rock climbing, and you don’t get the blurry images. It was fun to watch the kids climb; all three were pretty good. They could each get to the top of the wall and touch the top piece. It would have been more fun if it had been a bell to ring, but I suspect that would have been disruptive in a store.