I have been sharing lots of pictures of vacation Dylan and Vacation Raven. Yesterday evening as we were completing our daily walk, one of the twins reminded me of the Virginia Beach vacation. That was where Dylan decided he liked Potato Latka’s, a lot. We left a bowl of dog food out in our hotel room, for the three days we were on Virginia Beach, he didn’t eat dog food. Vacation Dylan doesn’t eat dog food. Vacation Raven does, but vacation Dylan takes the full opportunity not to be home, Dylan. Dogs on the furniture, dogs as family members are arguments I have with people from time to time. I have always believed that dogs or cats are members of the family.

If they get on the furniture, oh well.

My favorite pictures in this collection come from early in our second visit to Oak Island North Carolina. We had enjoyed going the year before with my family, so we went a second time. The pictures, in the beginning, today are off early in the week. I think either the first or second day. It has to be the second day because I took the filter off the camera after the first day.  Ruined a really good sunset with the filter, I had on. Anyway, the kids spent the first part of the week convincing Raven that moving water was ok. I suspect she ran afoul of moving water in the time before she joined our family. She didn’t like moving water when she first joined our family. 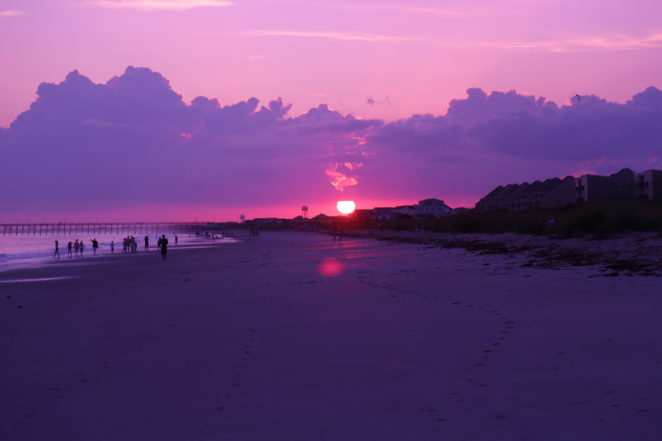 In the first couple of days, one of the twins would carry her into the water. She looked upset but not terrified. Raven had joined our family four months before and had picked the Twins as her original people. Little did we know that Raven had a long game that involved converting my wife into her person as well. The long game worked, my wife is now as devoted to Raven as the Twins are. She, in their eyes, can do no wrong! Anyway the first couple of days the twins would walk out into the water carrying her. By the end of the week, she would get in the water. Now she gets in without worrying; I guess the good memories of a forever home wipe out the bad memories that came with her to the home. Raven, like Dylan, is named for a poet. She is named for the object of Poe’s poem The Raven. Her full name is Raven Poe Andersen. When she does something, she is not supposed to do we add a second middle name (Raven Poe Marie Andersen) for effect. Dylan’s name is Dylan Thomas Andersen for the poet!