Christmas is a big deal in my family. My grandfathers (both) loved the holiday season. My mom and dad also love the season. That made the Christmas of 1998 very special. The last grandchildren for my parents had arrived, and the family could now move forward. The struggle that was the six months of the pregnancy was over for us. 1999 brought a lot of changes, but this was still 1998. The twins were healthy; we were in our new house in Mt. Airy and Gwen was not eating dog food. From the first time the Twins were in their high chairs, Gwen stopped eating dog food! The twins were not the cleanest eaters by any stretch of the imagination, and Gwen was a smart enough dog to wait!

Food was going to fall; you just had to be patient, food was coming! 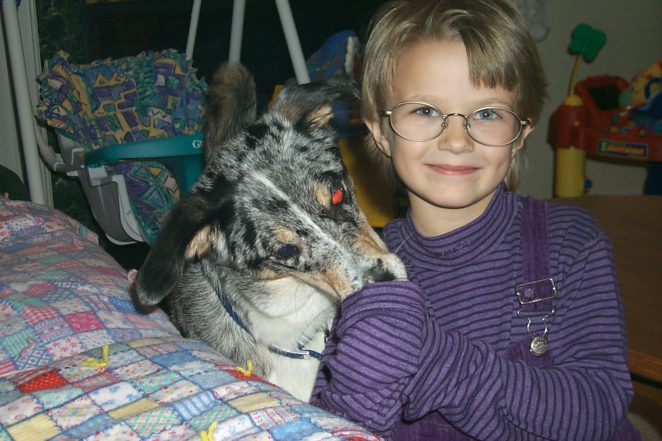 I miss Gwen sometimes; she was my first walk buddy. I could only take her on walks occasionally; she wasn’t good about other people, other dogs or for that matter other. But we would go for long walks she and I. She was not the walking dog that Dylan is. Dylan doesn’t let anything come between his walk and him. Period. Gwen didn’t mind as much about going or not going. I don’t think Gwen was a happy dog by nature. She was part of a lot of screaming about being fed and taken out when she was younger; I am not sure she ever recovered from that.

We had lights outdoors that year, 1998. We had a light up Reindeer and colored lights on the bushes. We didn’t often decorate the house, but we did that year. We would a few more times. We had decorated the house in Western Hills, stringing lights on the porch because my daughter wanted them! The same was true the first time we moved into our Mt Airy House and the house in Greenwood. We didn’t add lights when we moved to Maryland, but the kids were older then!

One of the things that I’ve been thinking about is starting the Family history challenge. Share 100 pictures of your family and some stories that go with either your family, your family, and the pictures or just the pictures! I haven’t committed yet to do that, but it is something I am thinking about! I don’t have the rules clear in my head yet, perhaps ten posts each with ten pictures like I said I am not issuing the challenge yet!