When I was a kid, we spent time in Bangkok Thailand. My father worked for UNESCO. They, UNESCO were building on the foundation laid by the US Peace Corps in Thailand. Now, layer on a secondary education system. My father was there to help build out the Science Education program for the entire country! But on the way to Bangkok and ultimately later my trip to Holland there were many stops. We started on our trip to Bangkok spending a week in Ireland. Just across the Galway Bay from Galway Ireland. We then wandered to Paris France for a week. My father was being briefed by UNESCO as to his job and responsibilities. Ireland was fun! Paris was fun as well. We stayed in an old hotel and croissants (warm) and milk (warm) every day for breakfast.

On the way to Thailand and on the way back, we didn’t stop in Amsterdam, or for that matter Holland at all. I got the opportunity to go to Holland later. The pictures today are of the old town experience in Amsterdam. A mix of both how people live now, as well as how they lived many years before. These pictures, taken before my wife got to go to Paris, were one of the reasons that she desired a trip to Amsterdam. The other being that her mother was a native of Holland. These pictures of the windmills spoke to her (we did end adding Amsterdam to our European Vacation in 2016).  This first trip was just me, wandering Amsterdam with a coworker. We were teaching a class and had a day of sightseeing beforehand. 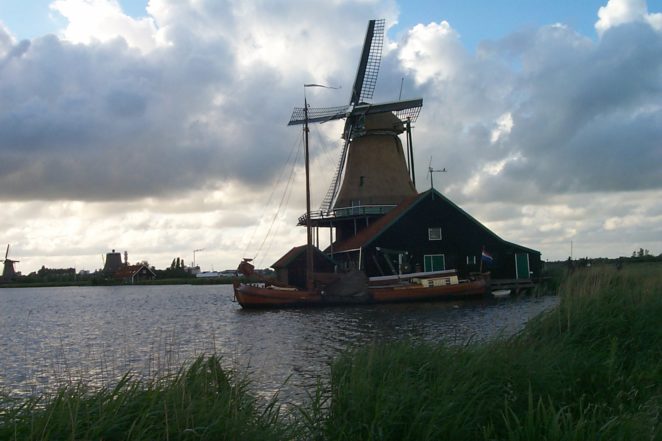 I have been back to Holland a couple more times. Once I spent an entire two weeks in the fair city, working with a customer. Holland and in particular Amsterdam is one of the easiest cities to get around. Well, I should clarify that as a US national, I sometimes find it difficult to operate in the world of public transportation. Mostly because I didn’t have a lot of exposure to it. I did ride the L in Chicago. I have also ridden the Metro in both Atlanta and DC. But in Amsterdam you can get virtually anywhere in the city on the subway. You cannot as easily in Washington DC. I think you can argue that the best subways in the US are New York City. It isn’t like the subway in Europe.