All the pictures shared today come from Christmas Day December 25, 2018. Some of the pictures were taken by my daughter. Some of the pictures were taken by me. The first set of pictures shared are of the dogs. Many years ago we had a tradition that when opening presents Fran, our lab at the time, would wear a bow on her head. Raven is the lab that loves to play dress-up and wear clothes. She wore the Bow on Christmas Eve. The hilarious thing is, she is so careful not to knock the bow off. Fran had the bow off within 10 seconds. Half the fun of older Christmas pictures was watching my daughter scramble to get the bow back on Fran before the pictures. Raven doesn’t let the bow come off her head, but again her favorite things are dress up!

The dogs all wore sweaters. Now Tamsyn and Raven, both love to wear clothes. Raven with her White seater was having a blast all day. Serenity and Dylan don’t normally really love sweaters. Tamsyn does because they keep her warm. She tends to get cold during the winter. Serenity wears them, but she isn’t happy about it. Dylan very seldom wears sweaters. It just so happens that in the process of moving out of the house, my daughter found Fran’s old sweater. Dylan is the only dog that was around when Fran was still alive. I suspect the sweater still smells like Fran. Dylan happily wore the sweater all the way to the time we went to bed. It managed to come off during the night, but was on the bed when we found it two days alter! 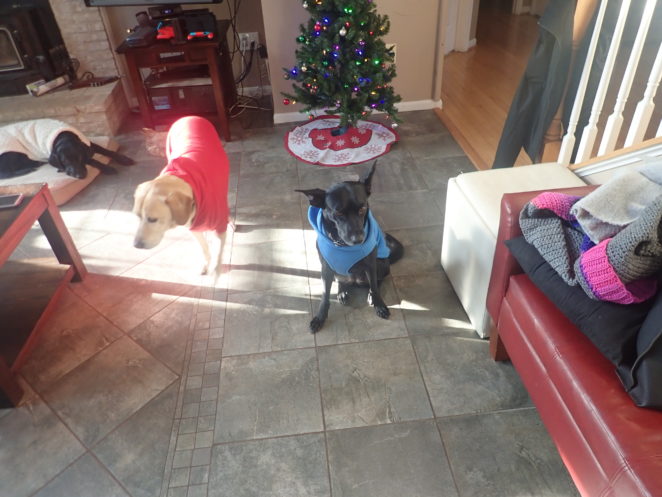 The last few pictures are of the Ebbel Skiver pan and creating breakfast on Christmas day. I like making Ebbel Skivers in the pan first because it heats consistently. I learned, from my father to make Ebbel Skivers on the stove. I learned quickly that having a gas stove or an electric stove made the process difficult. The pan would slide on the stove as you flipped the Skivers. You’ll notice the second picture is steamy, that comes from the cooking process as the pancake batter releases water into the air. The camera was a little too close, so it ended up steaming over. Once you flip the Skivers and they are done, you can roll them in powdered sugar. Then serve them warm, They are also good cold. The tradition is the first three batches are usually consumed by the kids. The dogs each get one (that was a popular batch) and then finally the father gets a couple at the end!