The pictures today are some of my personal favorites. Sadly they were also the ones most damaged by time. Most of these pictures were taken between 1956 and 1960. A couple maybe a little later than that. They show my father’s journey’s along the river. They also show the “tour” boats that wander up and down the river. There were three kinds of boats, speed boats (smaller) larger river cruises (seen in the pictures) and former WWII Ducks. At the time we were often at Dells the Ducks then were 30 years old. They are more than 70 years old now. I suspect most places have pulled the Ducks from standard daily use in terms of tours, based on the accidents that have happened.

There are also a couple more pictures of the stops that the boats made. They would stop and share some of the simply amazing carving done by the river. The River is a steady hand that is willing to work for millions of years. Growing up in Indiana I learned early about Karst Topography. That is where a shale cap, sits above limestone bedrock. Shale as a rock is less water soluble than Limestone. You can put limestone in tap water (slightly acidic) and if you are willing to wait calcium crystals will grow. If you don’t want to wit, you can put the limestone in water, add a little vinegar and speed the process up. Water that falls from above is acidic. Karst Topography is where the cave formed by the water, collapses and create what is called a Sinkhole. 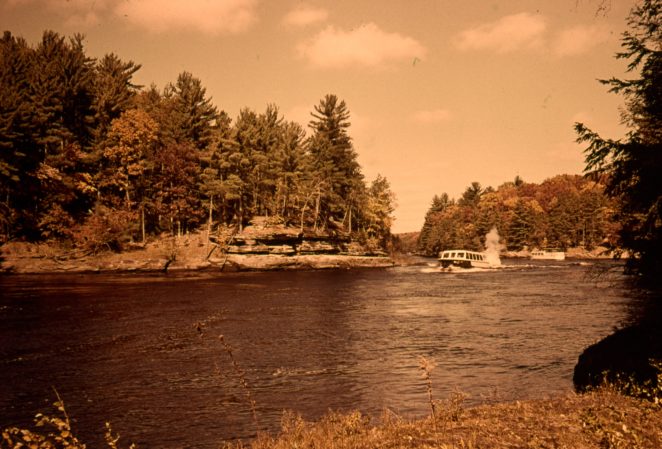 It should be called a collapsing hole. It doesn’t sink. It is not there today, but tomorrow it appears. The Dell in which Wisconsin Dells sits has limestone in the hills but no shale cap. A Shale cap results in caves. A Limestone bedrock with no cap results in the twists and turns of the river carving the stone. The tributaries of the river carve as well. Artists are willing to take millions of years before sharing their art! Those were the stops for the boats. They wandered with people up and down that section of the river. Some of the spots, as seen in the pictures today, you can get to via the overland trails as well. Dad drove one of the speedboats for the tourists, but he often with my grandfather hiked to the other locations.