We are now nearly done with the first of two Wisconsin River folders. Dad organized the slides by trays, carousels and then many slides that were loose. When I was little, after we moved to the house in Sycamore Knoll’s dad would show slides in the living room. Mostly when we had guests, but sometimes for all of us. When we lived in Sherwood Oaks, we used to do a TV dinner in the family room. We lived in a split level house. When you came into the house, you saw the dining room and living room with the kitchen walled off but on the same level. The first set of stairs took up to the bedrooms. It was a half set of stairs. The second set of stairs took you to the level with the family room and dad’s office.

We didn’t do that as often after we moved. I remember going to Cambridge, where Lake Ripley was located, we would sit in the family room of Grandpa and Grandma’s house, and Grandpa would show old movies. He had a couple of silent film comedies, and course hour upon hour of family movies. We’ve digitized all those films, and they sit on a DVD in my office (2 DVD’s actually) along with all the DVD”s converted now, of our kids as they grew up. Family history being both still and moving pictures. Dad was a still photographer. Grandpa took movies and stills. Mom also took movies, and she took many of the stills that included dad in them. Dad liked to hide behind the camera lens (so do i). 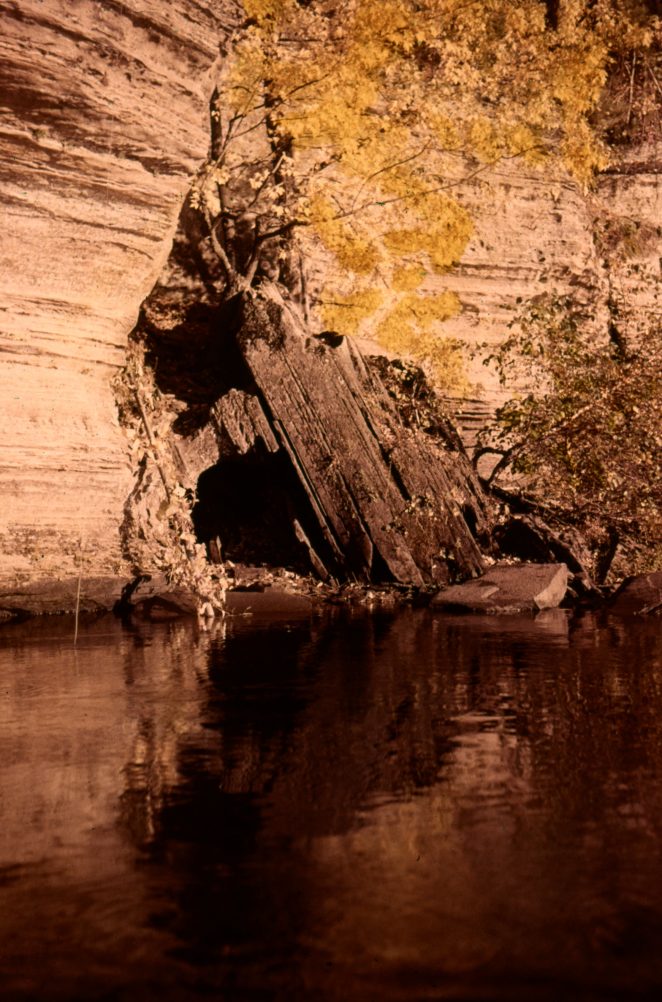 The pictures today focused more on the tourist places in the Dells. Dad and grandpa often photographed places that the tourists didn’t often go. But these are the rock formations, the places that the tourists went visited. The tour boats were double-decker twin engine boats. Going up the river, they would move along at 5 to 6 knots. Going with the current or downriver they were a little faster. The boats were not built for speed. They are, still in operation. Mom and Dad took the granddaughters on them in 2011 when we had our family reunion at the Dells. The twins and I ended up playing Miniature Golf as neither of the twins really likes being on boats.