First off, just to reduce confusion, the text has nothing to do with the pictures and the pictures are from many years ago. This is from snowfall in Indiana in 2004. The memories for me, when writing in the morning, are triggered by the images. Today I remember snowfall. In particular, the snow that feels when I was a little kid. We, my family, used to visit my grandparents in Wisconsin. My mother’s parents lived in Cambridge Wisconsin, on the shore of Lake Ripley. The Lake was a natural lake and was nestled in the hills of Southern Wisconsin. Well, hills of one side of the lake. My grandparent’s house was nestled on the higher side of the lake. 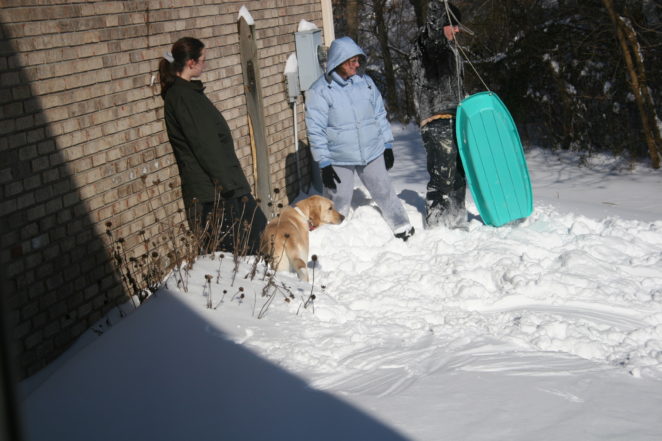 There was a great sledding hill that was my favorite. I spent hours sledding down that hill. When I was five or six years old, I wasn’t good at steering the sled and crashed into a tree. That was a bloody mess that ended up requiring several stitches. I didn’t stop sledding, although I didn’t sled again that year. I don’t remember the accident. I remember being at the Doctors Office in Cambridge Wisconsin. The actual hitting of the tree is a memory I don’t have. I do remember my mom and dad in the Doctors office. I also remember pictures of me taken that year, with the bandage around my head. It looked like the bandage from the Civil War novel “The Red Badge of Courage.

I also know, because I was told, that my father fainted when he saw my head. It was quite a few stitches, and I still have a scar many years later. I loved sledding on that hill. When our children were old enough to start seeing we had a much smaller hill for them to sled on. I know in part that had to do with what happened to me many years before — the reality of memories. Yes, I don’t recall hitting the tree. But I do recall the headaches that I got for a few days after hitting the tree. I was glad the kids got to sled, but secretly even more happy that it was such a small hill. I could see them, head bloody, coming in and needing to go to the emergency room.